The Toddlebike 2 is basically a ‘pre-balance’ bike which is designed for toddlers from around 18 months onwards. However, in practice is suitable to use as soon as little ones can confidently walk. As Henry has been walking since 12 months old, we were more than happy to give this a try. 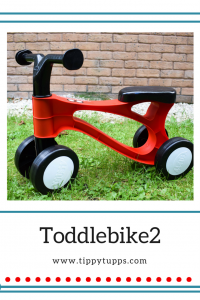 I’ll be honest and say that at first, I wasn’t too sure about the Toddlebike 2. It’s very plastic in appearance and a very basic shape. However, this is what we eventually fell in love with.

This basic shape is what gives it not only it’s unique look, but also the strength and durability to withstand my two children fighting over it daily. That plastic that I was initially unsure of? Well, that makes it super lightweight. At 0.8kg, this is one of the lightest ride on aid we have come across yet making it easy for little arms and legs to manoeuvre. Also to carry about in Henry’s case! 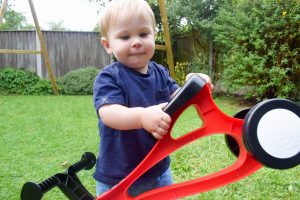 Henry is a confident little man and eager to get going as quickly as possible, but at 15 months he’s too small for traditional balance bikes. This is where the Toddlebike comes into its own as it’s a perfect fit for little legs to reach the floor and fact it is so light is nothing but a bonus. He’s still a little too small to get up much speed on it yet but he loves climbing on and off (over and over again!) and pushing it around the living room.

I have no doubt that when the time comes, he will be off like a flash. Whizzing around the village at great speed. He’s already getting to grips with the balance at coordination after a few short months so all we are waiting for I think is the leg length, so he can really get up some momentum! 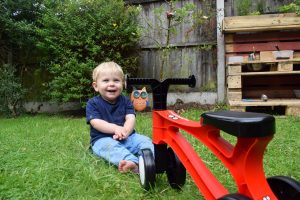 As for the eldest child in our family… At 3, my initial thoughts were that she had quite obviously outgrown it. However, on closer inspection of the guidelines it tells us that “a child should be able to sit on the seat with feet flat on the floor and a bent leg” as it’s all about propulsion.

Therefore, although she is ready for the next stage bike, it doesn’t stop her having a go. Something I’m happy for her to do as it’s been tested up to 100kg, so I know she can sit on and wheel around safely. However, her much preferred method seems to be to wheel her dolls around on it instead! 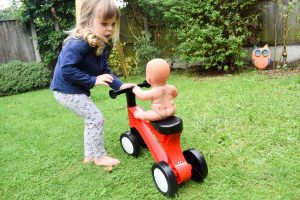 This puts it right in the middle of both Henry and Darcie with him being a little small for the Toddlebike and her at 3, being ready for the next level. However, it doesn’t stop either of them playing with it almost daily. I can just imagine them both whizzing up and down the driveway next summer: her on the next stage up and him on his Toddlebike. 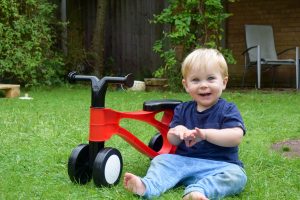 This is a great option for those people with little ones that are ready to start getting mobile on a bike, but don’t quite have the balance or coordination for a balance bike yet. The toddlebike bridges that gap between sit on walker and a bike and is the perfect first step towards independent riding. 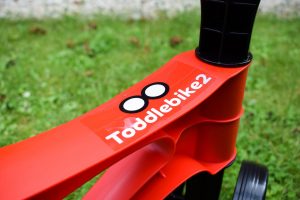 DISCLOSURE: I was provided with this item in return for my honest review. As always though, all opinions expressed in this post are my own.