Don’t You Cry by Cass Green 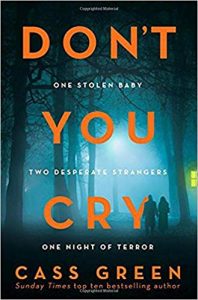 She saved your life.
When Nina almost dies during a disastrous blind date, her life is saved by a waitress called Angel. But later that evening, Nina is surprised by a knock on the door. It’s Angel – and she’s pointing a gun at her.

Now she’ll make you pay.
Minutes later, Angel’s younger brother Lucas turns up, covered in blood shielding a stolen newborn baby in his arms. Nina is about to endure the longest night of her life – a night that will be filled with terror and lead her to take risks she would never have believed herself capable of…

DON’T YOU CRY – MY THOUGHTS

Don’t You Cry is a compelling story of Nina who (after almost choking on a disastrous first date) finds herself in the midst of a terror filled night. Held hostage, she is pulled into a world of fear as she discovers her capturers – Angel and Lucas – are accused of murder and the abduction of the tiny baby she now holds in her arms. As the night passes though, it seems that not everything is so simple and there is more to this story than first appears.

Told from a variety of perspectives, the first half of Don’t You Cry has a wonderful pace. You feel things escalating but never know quite how things will turn out as the characters are such a complex ball of emotions. That’s exactly what I loved about this book as Angel and her brother Lucas are simply damaged. Showing that the world is not as easily defined into boxes such as ‘good’ and ‘bad’. Instead we exist in a world of grey, surviving if we can.

There are a few things I wasn’t as sure about with Don’t You Cry though. The second half of the book lacks something. I still loved the story line and I thought that it was a really interesting direction to take it in, but it lost something that made the first half so great. I think the lack of Angel and Lucas’ perspectives took away from the pace somehow. Also, Ian and Sam as the ex-husband and son who is absent on holiday felt very two-dimensional and nothing more than a plot / character motivation tool.

That being said, I really enjoyed this book. I loved Nina, Angel and even Lucas equally and found it to be a really compelling read. A thriller with a bit of a difference, you will keep turning to page to find out exactly what did happen that night.

Don’t You Cry is currently available on Amazon for £5 .75 (affiliate link).