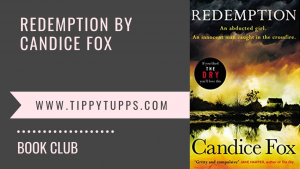 When former detective Ted Conkaffey is wrongly accused of abducting a teenage girl, he hopes the Queensland town of Crimson Lake will be the perfect place to disappear.

But nowhere is safe from the girl’s devastated father. Dale Bingley has worked out a brutal revenge plan – and if Ted doesn’t help find his daughter’s real abductor, he’ll be the first casualty.

Meanwhile in a nearby roadside hovel, the bodies of two young bartenders lie on the beer-sodden floor. As a homicide investigation unravels, Ted and his unlikely ally private detective Amanda Pharrell are brought in to assist on the case.

While Ted fights to clear his own name, their hunt for the killer will draw them into a violent dance with evil.

This is the second book in the Crimson Lake series, something I didn’t find out until after I had read Redemption. Thankfully it works fantastically as a standalone so at no point did I feel like I was missing out by not reading the first book. Redemption hooked me from the very first page though, as despite this being the second book you have enough information about both Ted and Amanda to understand how they got where they are in their lives and their relationships.

I loved them both as characters. Both are flawed and broken by what life has thrown at them, but both refuse to let it keep them down. They have adapted and do their best to look forward. This kind of every day courage I find admirable and helps me love them both a little more. I also loved the setting of Redemption. Having never been to Australia before, Fox does an amazing job of bringing it to life for the reader.

The plot is two-fold. On the one hand, Ted and Amanda are pulled in to work on the case of two bartenders who turn up dead after their shift one night. Alongside this though, things in Ted’s own case back in Sydney is coming back to the limelight as he is torn between the two. The one thing I would say is that while the majority of the book reads at a fantastic pace, the end seems to be wrapped up a little too quickly and neatly.

It doesn’t stop this being a great read though. Face paced and full of colourful characters, Redemption is a real page turner that will keep you gripped until the final page. What’s even better though, is that it is currently available to buy on Amazon for just 99p.

DISCLOSURE: many thanks to the author and publisher for granting me an eARC of this title via NetGalley in exchange for my honest review.