We love games in our house and now that Henry is old enough, we are always on the look out for new ones to try that we are all able to play together. So, when the opportunity came up to take a closer look at Dough Nab – a donut game – I nabbed it. Do you see what I did there? After all, who doesn’t love a donut?! 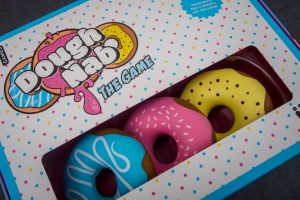 WHAT IS DOUGH NAB?

Suitable for ages 8+, Dough Nab is a bakery themed game where players are told to “see it, match it, nab it”! The aim of the game is to get rid of all your cards by grabbing the donuts the fastest and offloading your pile to the other players. The first one to get rid of all their cards, gets to lay claim to the head baker winners hat.

WHAT’S IN THE BOX

I didn’t really see the point of the little turn tracker if I’m honest and it didn’t really get used, but the head baker winners hat was a big hit! 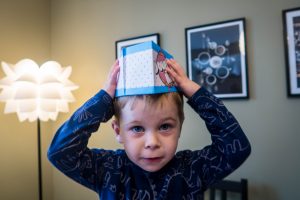 HOW TO PLAY DOUGH NAB

Each player uncovers one of the cards that they are dealt. As soon as there are three matching on the table, players have to race to grab the corresponding doughnut. Live action cards throw a spanner in the works and mix up play. It’s this unpredictability which keep things interesting for bigger kids and adults.

Bright, fun and fast paced – quick hands are a must! 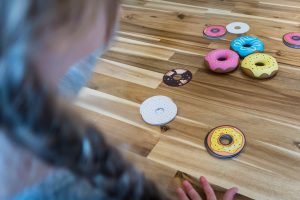 PLAYING WITH LITTLE ONES

Our two are below the recommended 8+ age range and so far we have been able to make the following adaptations. These adaptations mean that the kids can get involved with no frustration. 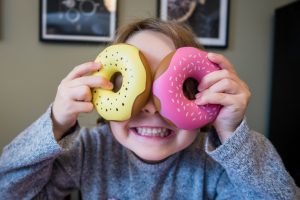 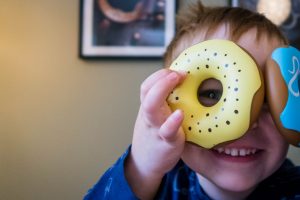 First up, that packaging. It’s beautiful. As soon as the kids saw it, they desperately wanted to play.

Overall this is a really cute game that is really easy to adapt to playing with little ones. We love a family game that can grow as we do and Dough Nab will allow us to do exactly that. 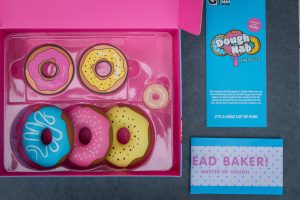 The Dough Nab game is available to buy from Debanhams.

If you enjoyed this review, they why not check out our other reviews over on the blog.

DISCLAIMER: we were sent the Dough Nab game for the purposes of this review. As always though, all thoughts and opinions are our own. 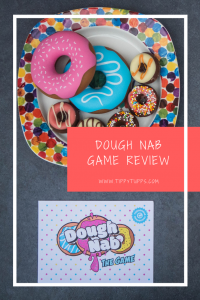