The Dead Ex by Jane Corry 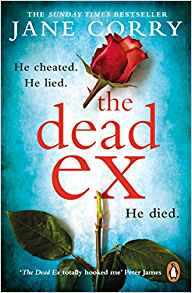 Vicki’s husband David once promised to love her in sickness and in health. But after a brutal attack left her suffering with epilepsy, he ran away with his mistress.

So when Vicki gets a call one day to say that he’s missing, her first thought is ‘good riddance’. But then the police find evidence suggesting that David is dead. And they think Vicki had something to do with it.

What really happened on the night of David’s disappearance?
And how can Vicki prove her innocence, when she’s not even sure of it herself?

THE DEAD EX – MY THOUGHTS

I loved this book. As in LOVED it. So much so that I managed to read it within 3 days. No mean feat for a woman with 2 kids and 2 jobs. The fact is that I just couldn’t put it down.

Set in three parts, the first is doninated by Vicki as she finds herself isolated in Cornwall after a brutal attack leaves her with epilepsy. Unable to deal with her new illness, her husband leaves her for his mistress. Her ex husband has now dissapeared and the police find themselves at Vicki’s door. All is not as it seems thought, as Vicki has secrets.

There are many more characters voices that make up the narrative to The Dead Ex but I don’t want to give away many spoilers. But I’ll just say they includes ex-wives, a child in care and a photographer with many other voices threading its way through the story as well. The timeline is fluid depending on whose perspective you are reading at the time, but it’s a credit to Corry’s skill that there is never any confusion over when the narrative is taking place.

I loved every character within The Dead Ex as no one is innocent but also, every single one is a victim too in their own way. It shows that life is not black and white and we are all a victims of our circumstances. Our experiences make us who we are and that is usually made up of various shade of grey. I think this complexity of character is what keeps you guessing until the very end as to what actually happened. Twists and turns all the way throughtout, Corry gives you all the characters but so many motives alongside each and every one of them that the truth only dawns on you moments before it’s revealed. Wonderful writing at its best.

The Dead Ex is currently available on Amazon for £2.99 for kindle edition (affiliate link). I would definitely recommend this for anyone who enjoys a good thriller which keeps you guessing right until the very end.