We’ve been in the house 2 years now and one thing we keep saying is that we need to do something with the back garden. It’s a medium size, easy to maintain but fairly dull when it comes to things to do with the kids out there. We live in a small village in rural North Wales that up until earlier this month didn’t even have a local park. So unless we wanted to drive somewhere, upgrading what we had at home was a must. 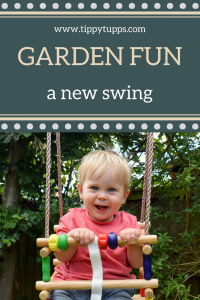 That’s when we found Big Game Hunters. Specialising in outdoor games and play equipment, they seemed like a great place to start to add a little fun to our garden. There is so much choice and I absolutely love the idea of the giant games they have such as connect 4 and jenga but seeing as our two are 13 months and almost 3, we decided to start with the basics and settled on a swing. More specifically we went with the wooden framed double swing set. Although this comes with a set of two wooden swing seats, we also ordered a wooden baby seat for Henry as he’s still likes to launch himself out of things if he can, and the swing seat wrap around for the Bear for when she gets more confident. In the meantime as she’s still so small, I thought she could share the wooden seat with the little man until she’s ready to upgrade! 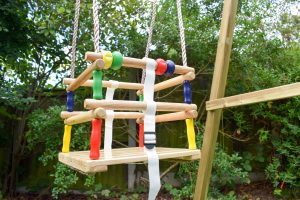 When delivered it literally comes as planks of wood. As someone who isn’t particularly the best at DIY, this terrified me but luckily the hubby is great at this kind of thing so was raring to set to work. The one thing holding us back? The weather! Typical British summertime we had to wait over a month until we had a free weekend that wasn’t a complete wash out to be able to build it up and then set it in the ground. As it was, the weekend we (and by “we” I of course mean hubby) got it all made up, he was fighting with some summer showers.

All in all, it didn’t seem too difficult but there weren’t any prefabricated holes in the beams and as the wood was pretty solid (which of course is a good thing!) it wasn’t quite as simple as just screwing the bits together. It meant each piece needed to be secured using some clamps, then drilled before it could be screwed into place. Not the end of the world but tools and skills that you may not necessarily know that you need. 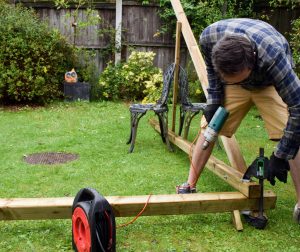 Once up…wow it was big! Nicknamed the gallows, it was clear we needed to set it in the ground before it could be used. We dug down with a little help from the Bear and once we made sure the frame was level – seeing as we were placing it on uneven ground – we set the base in postcrete before topping it off with soil for a more finished look. And there we have it, the finished swing set.

I won’t lie, I still thought it was pretty high as even I had to hop up to get on the swing; we needed to test it out for safety afterall! All in all though, we didn’t have to worry. Not only did both kids love it, but it’s actually a great height for them as it means it’ll grow with them rather than be (another!) piece of kit that we need to disgard in a few years because they’ve outgrown it.

The Bear even went straight for the wrap around seat, but as you can see she preferred to swing on her tummy or push her teddies in the childs seat. 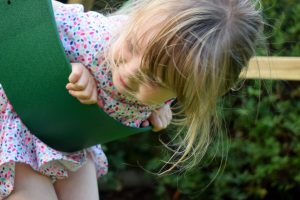 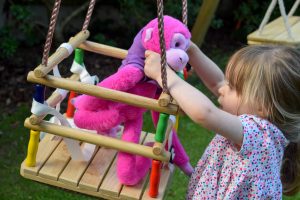 It took mine and hubbys weight at full swing so I have no doubt that this will last the children for as long as they want it – and judging by the fact that we enjoy it too, that’s going to be some time!

I also love that you can chop and change what equipment is used in the frame, so when they are older and perhaps prefer a traditional swing along with a trapeze bar, then you can just swap them in.

If you haven’t guessed, I love this almost as much as the kids do!

It is a quality piece of kit, beautiful wood and sturdy. You know that with a little bit of care, this will literally last a lifetime. However, this is not the easiest thing to put together and if it just had a few more prefabricated guide holes, it would make the entire process a lot easier and quicker!

That being said, with a little bit of extra kit such as the clamps and the drill to put your own guide holes in place, it’s easily overcome. It just takes a little more preperation and time. Therefore I would have so issue recommending this to parents who are looking to upgrade their back garden a little and add a bit of kit for the kids to play with. 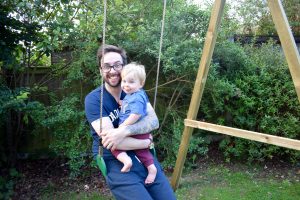 DISCLOSURE: this is a collaborative post with Big Game Hunters though all thoughts and opinions are my own.