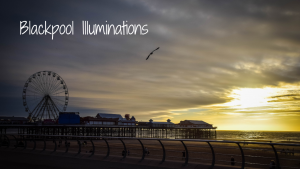 These streets will make you feel brand new…..Big lights will inspire you…..Let’s hear it for Blackpool, Blackpool, Blackpool. Ok, so I know it’s a stretch but last weekend we headed somewhere which during the month of October, probably has an electricity bill which matches Times Square. Yes, I’m talking about Blackpool Illuminations!!

None of us have ever been to Blackpool Illuminations before and after a failed start last year (when we thought that they were on until Christmas but in fact they finished in early November) we decided to take a closer look. The illuminations use over one million bulbs spread over 10km across the Blackpool promenade, promising to be a sight to behold.

So, we met Papa Bear from work, piled in the car and headed up the M6, Blackpool bound.

I won’t lie, arriving was a struggle as the traffic was BAD. Making our way up to Blackpool took around an hour but it was another hour before we got into the city centre and found somewhere to park. We did expect this though – it was Blackpool Illuminations after all – so it didn’t come as a surprise. Especially as we aimed to get there late afternoon, so we didn’t have too long to wait until it got dark. We decided to stay close to the tower knowing we wouldn’t be going too far with a 2-year-old and 4-year-old in tow and I’m glad we did as it meant that we were close to the car at the end of the night. 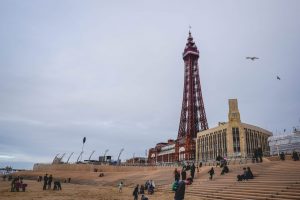 Once parked (finally), we headed straight to be beach knowing that this is where the kids would have the most fun. We were right and for the next hour and a half they had the best time on the beach. They ran, they raced, they drew in the sand and after a bit of umm-ing and ahh-ing (with a quick Google) took a donkey ride. Henry’s first. 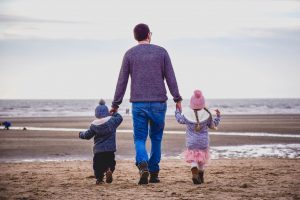 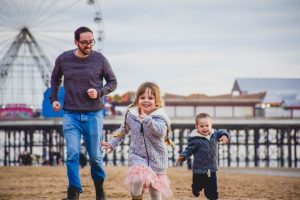 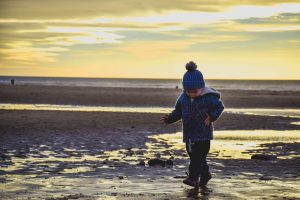 I find the beach at Blackpool is an interesting contradiction. A wide sandy beach littered with rubbish, donkey rides steeped in tradition but tainted by a bad reputation, iconic landmarks which are starting to look tired. I have to say, there’s nowhere like it and with camera in hand, I had as much fun as the kids did on the beach. 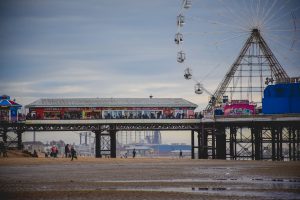 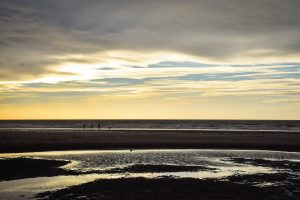 There was no doubt as to what would be for dinner. Fish and chips with a promenade view of course. It was busy, it was overpriced, and it was completely what we expected. 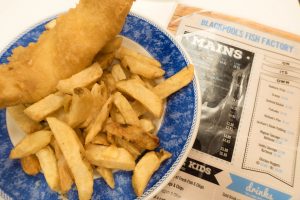 Sadly, the chips were pretty awful – overcooked and stale – but the fish was delicious. Beautiful tasting and fresh. Even Henry wolfed it down and enjoyed every bite.

After dinner, it wasn’t quite dark enough to head out to see the lights yet so off we went into the arcade to spend some time and £££. Luckily the Bears are a little too young to do any real damage yet and were happily entertained by the 2p slot machine and a few toddler rides in the arcade for an hour while we waited. 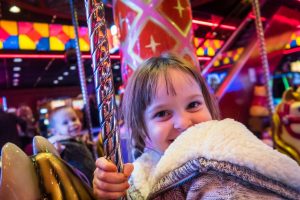 Before we knew it, the day disappeared,  and the lights came on. The kinds LOVED it. Full of bright bold colours and the hustle of a busy city, it must have felt like a different world for the Bears. 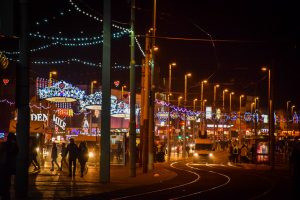 We headed back up to the Tower in time for the show starting at 7:30pm, and happily sat down to watch the production. It didn’t disappoint,  and the kids were amazed by the show projected onto the side of the building beneath a lit-up tower. 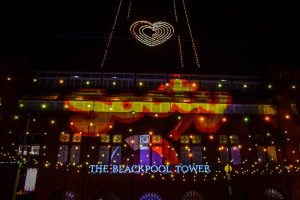 8pm arrived though and my little man knows his bedtime and promptly nuzzled into his mama, drifting off the sleep while his sister raced around comedy square soaking up the atmosphere.

It was soon time to start heading home though so we trekked back to the car and got 2 tired little Bears into their pj’s ready for the drive home. There was time though for a (very slow) drive down the 10km prom to take in all the sights of the Blackpool illuminations. We’re glad we took the time to do it as it really was a sight to see. Layer after layer of gleaming lights.

Overall, we had a great late afternoon / evening out. Would we go back to see the Blackpool Illuminations next year though? Probably not. The kids no doubt enjoyed it and loved the lights, but I can’t really see it being any different year on year. I have no doubt that we will be back at some point when the kids are in a different age bracket and will most likely have a different experience, but for now I think we will be happy with the experience that we have already had. 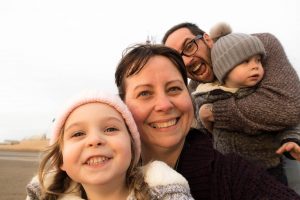 However, I think we will probably head up that way again just for a day trip as there is nothing that is quite the same as Blackpool. It looked exactly like it did when we last went about 10 years ago, and it seems like nothing much has changed. In all honesty it probably hasn’t but there is also something oddly reassuring about that. No matter what else may change, Blackpool will always be Blackpool. 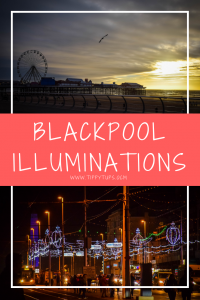 If you enjoyed this post then why not take a look at some of our other Days Out recommendations.